Some of you probably clicked that link ready to defend the good name of social media, and you deserve commendation for your efforts. You can put the pitchforks down for a moment, because this article is not what you think. I love Twitter as much as the next person, but it’s the buzzwords around these types of sites that we can do without.

You’ve probably seen tweets testifying to the “money-making” or “brand-building” power of social media marketing. As sites like Twitter, Flickr, and Facebook grow in popularity, it seems like the term “social media” is tossed around a lot as an instant solution to any internet problem. What does it really mean?

Social media is just a buzzword until you come up with a plan. Using a word is easy — coming up with a plan past “register for this site” is not.

Get to the Meat

One Mighty Roar will never hire a social media consultant, because the title describes nothing tangible. “Social Media Consultant” is an easy resume byline that can be based on as little as a few years of uploading photos to Facebook. We believe that a person who genuinely understands social media presence looks good on more than just paper, and won’t need a title to prove it.

Social Media is to online marketing what “Strong Leadership Skills” is to the resume. Neither really describes the value, and both deserve a series of follow up questions to get a real answer. When used alone, it’s often a very eloquent way to say nothing.

This isn’t to say that you should avoid using the term social media. On the contrary, you should feel free to use it as much as necessary to explain a plan. The term only becomes a problem when used as an abstract answer to a concrete problem. Let’s see an example of this. Suppose a client says they need to find a new way to survey customers. How could you respond?

Even though the concrete solution isn’t the most innovative, you hopefully get the point. Instead of offering a psuedo-answer by way of buzzword, a tangible example is given. Notice how the term “social media” doesn’t even need to appear.

If someone told you that they were using the internet to help their business, wouldn’t you ask them how? 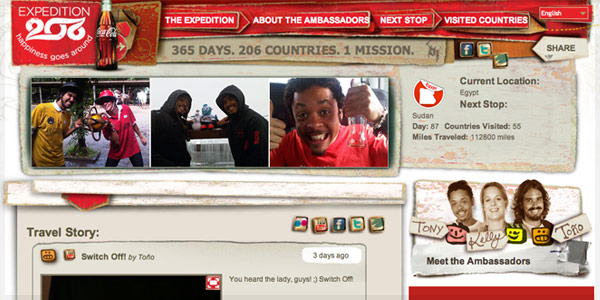 What does good social media look like? Coke recently launched the Expedition 206 campaign. The expedition is a year-long promotion based around the world travels of three “Happiness Ambassadors”. Along the way, the ambassadors actively update Twitter, upload videos, and engage with the community following them.

This is innovative. The campaign takes everything social media has to offer, combines in one place, and does so with a purpose. Even though Coke might not get direct income out of it, the promotion and hype around running such a cutting edge campaign is sure to build brand value. Is this the type of campaign that was pitched with buzzwords? Probably not.

I would much rather have a client understand the proposed ideas than be dazzled with concepts that sound fancy at first, but require more explanation later. At One Mighty Roar, we feel that a basic explanation is at least worth the effort. We’ve found it damaging to assume that the client would rather see us work “internet magic” without explanation.

I also know from experience that there are plenty of clients who would love to hear the first answer from the above example. New and cutting edge words have a way of exciting people, but hype is not a sustainable relationship. In the long run, especially as people get more aware of these services, the term will become as useless as “using the internet”. People will know it’s not that simple, and demand something real. It’s better to lead the charge of tangibility now than wait until the first real “What do you mean by that?” question that leaves you stumped for an answer.

Unfortunately this over-generalization has made the rest of us well-intentioned folks feel guilty about using the term. Some even avoid it at all costs for fear of feeling amateur. The pond isn’t ruined just yet. All it will take is some thoughtful project planning instead of buzzword dropping.

What do you think?

If you’re interested in reading more about social media vocabulary and effectiveness, try any of the links compiled below.